I´ve never carried that much gear in my life. During one of my road trips last summer, I decided to visit the Gallatin Range in Montana (just a few miles from Yellowstone National Park) and do some back country camping. Despite not carrying a proper tent and accidentally leaving my jacket at home, I felt like a camel on a mission.

My mission, I mean hike, began early in the morning at an abandoned trail head off of highway 191. After securing the many straps and belts on my backpack, I began attaching necessary items to my body. I carried bear spray (against crazy bears), a .39 Revolver (against crazy humans), and my old camera. I would have felt like a real back country bad ass if my night pack wouldn’t have given off them insane 90´s vibes. Instead I probably looked like the human equivalent of the leaning tower of Pisa making it´s way through tall grass and lush forests.

The hike took only about 4 hours, excluding a short nap under a friendly old tree, and after checking out the camp site and surrounding area, I began setting up my camp. After I got my fire going and hung my backpack off a tree, I grabbed what I thought was my tent and headed to a nearby field. I found an area which looked even and comfortable (it was horribly bumpy which I realized later that night) and began unpacking the tent. As soon as all pieces lay before me, I realized that I had grabbed the odds and ends bag, which contained half a mummy tent, various strings and other tent related items. 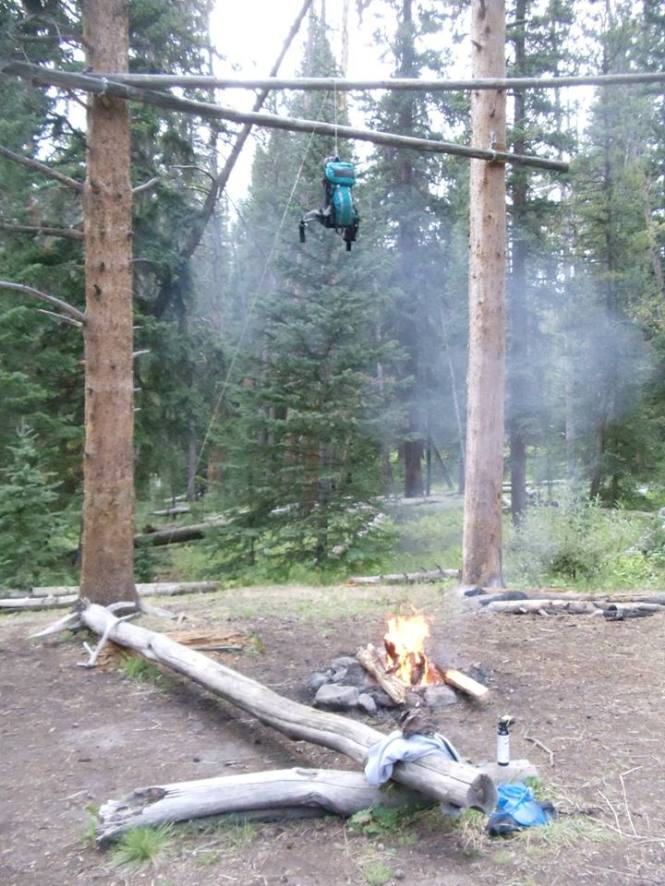 After about an hour of attaching strings, tarps, and logs to my so-called tent, I had a pitiful yet somewhat stable shelter for the night. As the sun disappeared several hours later, a powerful storm began rolling in. I hurried to put out the fire and get ready for bed in time. Back country campsites are high maintenance as everything needs to be in order and cleaned up for safety reasons: All food, used clothing, and hygiene articles need to be hung off a tree to decrease the likelihood of wild animals such as grizzlies visiting. Fires need to be drowned using plenty of water and wood-free dirt to avoid forest fires. All weapons (knives, guns, tasers, bear spray, etc.) need to be in their proper location and, and, and.

When I finally finished prepping my camp for the night, the wind was blowing strong and it began raining. I slipped into my shelter and made myself comfortable (well, I tried). As mentioned earlier, I had picked an incredibly uncomfortable spot and due to the raging storm outside had no choice but to suck it up. As soon as my head hit the ground, my airways began closing up. In a sudden onset of stupidity I had brought a lot fewer allergy pills than I needed and was slowly but surely suffocating. After about an hour of agony and panic, I suddenly slipped into a state of complete calm. The storm outside suddenly sounded far away, I felt comfortable, my body was heavy, and a welcoming fog settled in my mind. I curled up into a ball, closed my eyes and fell asleep almost instantly. Thank you body for the emergency shut down!

Yes, I could´ve built a better shelter but I stopped at “good enough”.

The next day was pretty uneventful and is really not worth mentioning. Overall, I had a great time at the Gallatin Range and would recommend it to everyone who would like to camp in Yellowstone but wants to avoid massive numbers of hikers and tourists.

What´s on your mind? Cancel reply